I adapted this brownie recipe from Alton Brown’s Cocoa Brownie recipe. The only chocolate we will be using here is in the form of cocoa powder. I have tried many brownie recipes in the past, and I find myself constantly coming back to Alton’s recipe. I thought about how I could possibly make these brownies even more delicious, and then I noticed a can of sweetened condensed milk in my pantry. Dulce de Leche immediately came to mind, and I got down to business.

You can buy canned Dulce de Leche, however I made mine from a can of sweetened condensed milk. I removed the wrapper from a sealed can of sweetened condensed milk, and placed it in a large pot, filled a pot and covered the can with water, until the water was about 2 inches above the can. I brung the water to a boil and then lowered the flame down to medium heat so that the can could simmer in the water for 4 hours. Make sure to check on the water periodically to make sure that there is at least an inch of water above it, adding water if necessary. After 4 hours, turn off the heat and let the can sit in the water  for another hour. Remove the can from the water and let it cool at room temperature overnight. You don’t want to open the can while it is still hot because the caramel will burn you, so please let it cool for at least 12 hours.

As you’ll notice, this recipe does not call for any leavening agents such as baking powder and baking soda. “So how will the brownies rise?” That’s where the beating of the eggs comes in. I whipped the eggs using the whisk attachment on my KitchenAid mixer for five minutes. In this time, the eggs will become lighter in color and foamy, which will add some air to the brownies. You can do this by hand if you do not own a stand mixer, it’ll just take a little bit longer. You’ll definitely get a great arm workout out of it as well!

Don’t Over Mix the Batter!

I mix all of the ingredients together and leave the flour and cocoa powder for last so that the flour is not over mixed. The more you mix flour, the more gluten forms, resulting in a tougher brownie batter. We do not want that, so when adding the flour and cocoa powder, I mix it in the mixer until the batter starts to come together, and then finish combining by hand. I fold the mixture onto itself until there aren’t any streaks of flour left.

You can have free range here. Go crazy with it and let your creative side out. They will come out beautifully, and even if they don’t, they will still surely be delicious.

These brownies take about an hour and a half to cool. I cool them for 45 minutes in the baking pan, and then I remove them from then pan by pulling on the overhanging parchment paper. I allow them to cool for another 45 minutes outside of the pan.

After they’re cooled, you can dig in! I hope you enjoy!

Dulce de Leche (you can by a can already made at the store, but if you want to make yourself, follow the recipe below)

If making the dulce de leche at home, allow at least 12 hours to cool at room temperature before opening the can.

Allow melted butter to cool, so that it won’t be too hot when added to the eggs. 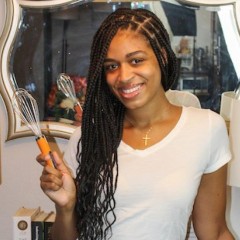 Welcome to my blog!

My name is Speshyl , and I am a self taught home cook and recipe developer. My world revolves around food, and I cook things that make me happy. I am always open to trying new things and stepping out of my comfort zone, which you will see happen a lot here on this blog. Read More…

Last night, I had a bachelorette season finale wat

Hey, friends! Yesterday my sister and I took a tri

Yesterday night wrapped up a week of final exams &

Arctic Char with Curried Mussels. This is a @marc

This error message is only visible to WordPress admins

There has been a problem with your Instagram Feed.

From one foodie to another, recipes from the soul.